How to get around in South Korea by bus, metro, ferry, plane and more Wondering how to get around in South Korea? Don’t worries as this is an easy task. South Korea is one of the most developed and modern countries we have ever been to. Their public transportation is so great that they have one of the world’s best underground system and run with high-speed trains for over a decade now.

If you want to find the best way to travel around South Korea, you came to the right place, as here you will find everything about the metro in Seoul and other main cities; public and intercity buses; ferries and planes; what websites and mobile apps can help on your journey and so on.

Just a quick info before we carry on: very little people speak English in the country. However, tourist information points and signs are everywhere, so don’t worries as you will see it’s easy-peasy to get around South Korea. How to get around in South Korea: traveling in and around the cities

Within the major cities, the best option to get around is surely to use the underground. Seoul’s metro for instance is one of the most complete underground system we have ever seen – extremely modern and with English information all over.

But watch out, only the five biggest Korean cities have this type of transportation: Seoul, Busan, Daegu, Gwangju and Daejeon.

You find all the information about the Korean underground system (timetable, fares, etc) on their official website.  We also recommend you to get a free mobile app called Subway Korea that will surely help you out. 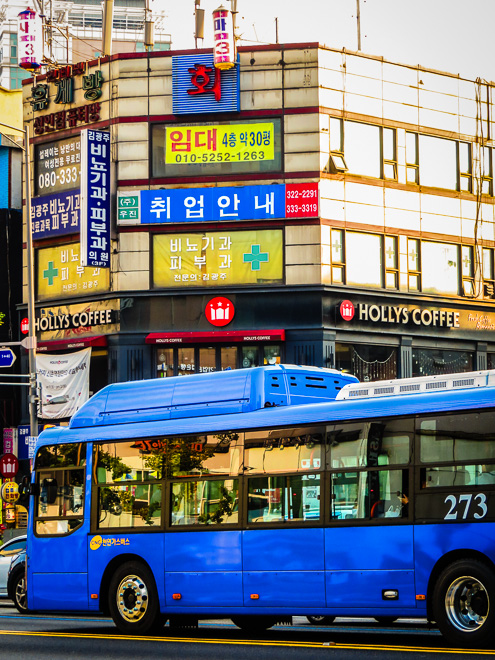 When visiting places with no underground system, buses are a great way to travel both within the city and to some outside tourist attractions (such as Buddhist temple or a parks, for example).

The bus fare costs about 1500 WON (approximately US$ 1) no matter what is the destination and you can purchase your ticket with cash or a transportation card when boarding the bus.

Find all the information about South Korean local buses here.

How to get around in South Korea: intercity travels Surely one of the best ways to get around in South Korea is with the Korean Train Express.

As we said before, South Korea operates with high-speed rail for over a decade. The Korean Train Express (KTX) travels at 215mph and there is the possibility of travelling standing up in order to lower the ticket price a bit. Tickets can be purchased at www.letskorail.com .

The long distance buses in South Korea are great! They can take you anywhere around the country at pretty much any time. You can just show up at the bus station and buy the ticket (that’s what we did every time and had no problems finding availability).

If you would like to book your ticket in advance, you need to make a quick registration and the help of a Korean friend will be handy. For that, try logging in at www.kobus.co.kr

Buses are cheaper than trains but still slightly expensive (as everything in the country, I guess). The price for a trip from Seoul to Busan (200 miles), for instance, goes for 24,000 WON (22 US$) the cheapest. There are different bus companies though, some deluxe and some standard. If you are after the cheapest option, make sure to buy the correct ticket. You can ask the attendant something like: “Ilban buspio wonheyo!” (“I would like a standard bus ticket, please”). All major Korean city will have an airport and if you buy tickets in advance, they won’t be really expensive. We always use Skyscanner for finding good deals.

We heard from a few Korean friends that getting a lift in there was not so easy. In the other hand, we read the opposite on the internet and so we decided to give it a go. What we found out is that in fact is quite difficult to hitchhike over there. We tried a couple of times and both times we had to wait for over an hours until someone stopped for us.

The language barrier was also a big issue to get a lift as most people drove off just because they didn’t understand.

How to get around in South Korea: Traveling abroad

Did you know you can travel from South Korea to Russia, Japan and other neighboring countries by ferry? There are daily boats leaving the two South Korean ports of Busan and Donghae and you find details about the journey here.

That is the most common option to travel to and from the country. All the main cities have modern airports. The national company, Korean Air, offers comfortable and affordable flights.

Can you cross the border from South Korea to North Korea?

Definitely not. The border between South and North Korea is closed and it is NOT possible to travel between them in any way.

To go to the northern neighbour, you have to choose either Russia or China as your departure point.

*This “How to get around in South Korea” guide was originally written in February 2017 and updated in 2021.