What a wonderful country to generate any sort of discussions! Historical, Political, Social, etc… How is the life in Egypt?? The first impressions we had from Cairo couldn’t have been better. So far, everybody we have met were extremely friendly and helpful. We know Brazilians were very welcomed here (mainly because of football, well…) but we also know the level of harassment in some Arabic countries can go to a whole different level.

When we visited Morocco in 2010, for example, we met some incredible people but we have also been through some minor bad situations for being tourists. In order to avoid that, Fernanda decided to cover her hair with a scarf, even though the hijab is not mandatory in Egypt. We felt better walking “freely” in the streets of Cairo.

Tiago’s beard was also handy and people would only find out we were foreigners once we had to ask for something in English… and then everyone on the streets would surround us trying to help or simply curious to find out where we were from or even trying to teach us a bit of the Quran. When we got there

Our first day out in Cairo was straight away to see the Pyramids in Giza. It is a splendid monument. However, the situation surrounding is appalling. It is all about money given, money taken.

It was sort of difficult to fully enjoy the amazingness of the site and ignore the people, such as the guide who lives just on tips – even though the money paid for the tour is high, approximately US$100 each (we managed to pay US$25 each but do not say to anyone!). He does not receive any of that – or the inhabitants of the nearby neighbourhood who keep asking money to feed the horse, himself or his family. Our thoughts were divided between the astonishing monument and its importance and the people living around it.

Even the police asks you for money after have taken your picture or given you information! 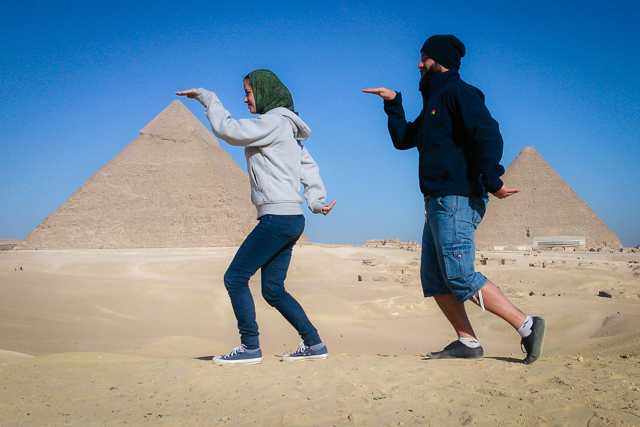 Egypt has been through a coup d’état in 2013 and for what we heard so far, it became a safer place. Our first impression after the revolution is that the country lives now in peace. Even though we saw heavily armed police in pretty much everywhere we’ve been, people seemed happy.

As well as in many other places, there is a huge dichotomy between the supporters of President Abdel Fattah el-Sisi and the ones that disagree with the political situation. Either for or against the situation, everyone we spoke with were unanimous in describing the strength of which Sisi runs the country. In the middle of this censorship and vigilance, the Tahrir Square remains clear of protesters, since the last ones who have done so ended up arrested. That is when we began to perceive more fear than acceptance. We felt the people fear the government more than they agree with the current political situation.

One of our drivers who, at first, was saying that the country is now safe and very good, drove us back saying – after probably have gained our trust – everyone hates the new president. Because he is not democratic, because he killed more Egyptian people than any other person in power in all Egypt’s history, because people has not the right to say what they think or what they want as police is now disguised as normal citizens and you do not know who is behind you.

You would also be interested in: Religion in Egypt

At other moment, for instance, we spoke with the owner of the tour company which took us around Egypt. He drove us to the airport and clearly had a better financial stability than the first driver. He spoke freely to us about his sympathy with the current government.

Both drivers were muslims but the second one mostly defended his point by saying that the president Sisi controlled the Muslims Brotherhood and the extremists in Egypt. He said that, with the Muslims Brotherhood in power, Egypt would never have any proximity with occidental countries, particularly with Europeans and USA. He agreed with the coup d’état because there is now order in the country.

Two arguments, albeit opposed to each other, from two muslins Egyptians. It was great to have both perspectives, particularly because we try to avoid any political conversation here. Although this is always the subject that intrigue us the most, we understand the situation is not the most reliable one (with journalists and activists in jail) and we prefer not to take the risk. Now, regarding the social issues said earlier in the post, we are now trying to forget it but is rather impossible. It affects us too (this may sound extremely selfish but it would be impossible to enjoy any part of the trip with so much poverty around).

People now are much more in need of the tourist money because there is no tourist and that is all they know. Most of them have always lived on tourism and depended on it. But anyways, everyone we meet is very confident that now the economy and tourism in Egypt will take off once more.